What is La Tomatina?

I’m still quite possibly in a state of shock so can’t understand if I absolutely loved it or utterly hated La Tomatina. It was just all so completely overwhelming.  This experience was on my bucket list so I needed to do it.  That’s my life’s mantra.  It’s something I’ve stuck by ever since I was 18 when I decided up sticks and leave to live in Spain.  Alone and without a word of the lingo, much to my parents’ dismay.  It hasn’t done me any harm. In fact, has enriched my life so much that I probably have more stories to tell than a 70-year-old lady.

La Tomatina festival in Buñol just outside Valencia, Spain has been on my bucket list for some years now. Therefore paramount that it got its own little, ticked box on my mentally noted bucket list. So when some friends of mine from Mumbai messaged me to say they are on a road trip through Europe and they’d be smashing tomatoes at the world famous tomato throwing festival.  Well, in a heartbeat I was in. 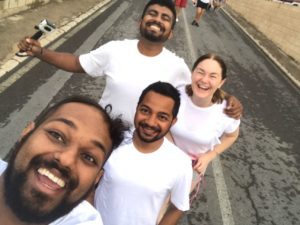 I bought my entrance tickets and booked my flights quicker than you can say “tomato war” and was ready to rock. Bring it on fellow La Tomatina ’ers, I’m ready for you. 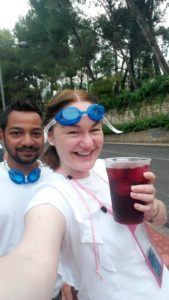 Friends recommended that I bring goggles with me to stop tomato acid stinging my eyes.  So I bought some there but they were as much as useless.  Soon as they fogged up I couldn’t see a thing anyway, so ended up not using them.

The festival kicks off at 7:30 am with open-air DJs, sangria and paella food stalls on all the little streets leading in.  This warm up to the event for me is actually one of the best parts of the day.  The atmosphere is electric and everyone is hanging around dancing and gearing up for the madness.  Which includes a sangria breakfast, of course.

The first tomatoes are fired into the crowd at 11 am sharp so don’t be late.  These people don’t mess around. Once the clock strikes the hour, the tomatoes are let loose.

We were total amateurs squashing right up to the front row of where 6 trucks were about to unload tonnes of ripe tomatoes on top of the waiting crowd.  This was a big mistake, crowds of 30,000 strong were pushing and everything got a little full on for me. I felt a little crowd anxiety right when the excitement was building up before La Tomatina kicked off.  Once the first truck came and offloaded its cargo, carnage broke loose. 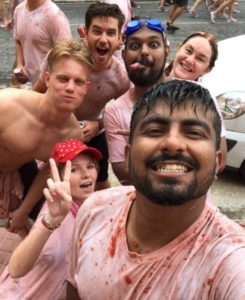 Tomato smashing at its finest unleashed and my white t-shirt was no more.

At this stage, I moved toward the back of the madness and found it a tad more comfortable.

In total it takes 6 trucks a total of one hour to empty tonnes of tomatoes over 30,000 people. Leaving the minions to have a mash-up in a river of what can only be described as Minestrone soup, in which I felt like the white pasta. I was bashed, smashed, hit, lashed, whipped, beat and thumped with tomatoes.  There was one point when I was left thinking that I must be crazy for actually paying for this.

I have to give full credit to the local townspeople who are great sports.  They even cover up their houses with plastic so the paint doesn’t stain them.  They opt for this over complaining of the tomato juice ruining walls.

You can clearly see it’s an important source of income for them  – cashing in with little paella and sangria stalls outside their houses.  Music thumping, dancing on the streets, great atmosphere.  I actually preferred the event before and after.  Once locked into the little street where the tomato throwing takes place it was maybe just too much, for me.

Strangers Are Just Friends We Haven’t Met Yet

I had lost my friends and my eyes were stinging from tomato juice. I just clung on to anyone who could either balance me out or keep me close to a wall where I was safe.  As the security folk pushed the packed crowd back, a stranger named Frank with an American accent put his arm around me and told me I was safe, that he had me.  He held me so tight for all of 3 minutes.  Then the next truck came pushing through the narrow street and carnage broke out again.  I never saw Frank again, nor do I ever expect to in my life.  He will ever know that; Frank in the sailor suit with the America accent was my hero for the day.

He showed me kindness in the midst of madness and brought my anxiety levels right down. He helped me to embrace the crazy that is La Tomatina and that the war wasn’t real.  Just another way of humans letting go and indulging in some weird ritual.

La Tomatina is what it is.  I hope it goes on forever, never being tamed.  This crazy festival is an experience I hope everyone has at least once in a lifetime. It’s something so out of anyone’s comfort zone that you may love or hate the experience but I feel everyone should try it. If you love it you can go back every year.  If not, at least you’ve got a great story to tell – or a blog to write!

Afterwards, we had to wash ourselves using bottles of mineral water and buy new t-shirts from a local stall.  Local taxis wouldn’t accept us or any festival goers at the risk of staining their cars and leaving it stinking of tomato.  We were lucky that we were very friendly with our taxi driver to the event.  We made arrangements with him to come back to collect us on our return journey.  He planned to bring blankets to cover the seats of his beloved Mercedes taxi.  We also told him we’d use him exclusively for the rest of our trip and all our airport journies too.

No direct flights to Valencia from Dublin so had to take two planes each way by eDreams and cost €350.  On the upside, I did have the craic with some English lads I met on the plane. I even bumped into them a few times throughout the festival. It doesn’t matter if you go alone.  Everyone ends up lost from their friends so you’ll feel totally comfortable hanging out with complete strangers.

I stayed at a cheap hotel halfway between the town Buñol (where the festival takes place) and Valencia so it was easy enough to get between both.  The hotel is called La Caretta. Cost is about 40Euro per night each for a twin room.  It’s basic but we didn’t spend much time there so it completely served its purpose.