The plane landed on a strip of land and I wondered where the airport was. Then I noticed it through the window, not much, but I supposed it manages well the number of tourists actually coming to Ushuaia in Patagonia.

Once the plane door opened and I stepped out, I was greeted by a blast of the cleanest, freshest air I have ever inhaled in my life.  I’m not even sure my words can do justice the feeling of energy and vitality my body got from breathing in this pollutant free, oxygen-rich air.  Then I became aware of the fact that, here I am at the End of the World, ready to go on an expedition cruise to find glaciers and penguins and the only thing I’m obsessing about clean air!

Ushuaia is the southernmost city of Argentina, not much of a city though, more a town.  It has a harbour, so is the gateway to the Beagle channel and the Magellan straight, exactly where I was headed.

The End of the World – Patagonia

My adventure to El Fin del Mundo, literally meaning the End of the World onboard an expedition cruise ship is easily one of the most spectacular things I’ve ever done in my life.  The ship took me from Ushuaia right down to the very tip of the land that is South America, if you look at a map, where the land goes into a little point at the end, this tiny little rock at the very tip is called Cabo de Hornos, then sea and next stop Antarctica. Although there is evidence of settlements of native tribes of the Yaghan people on the lands around the Beagle channel up to 10,000 years ago, it is important to keep in mind that, this part of the world has only been known to us westerners for less than 200 years.  It was sailed by a captain Fitzroy, who took a young Mr. Charles Darwin (yes, the Charles Darwin) on an expedition aboard HMS Beagle, hence the name of the channel.  This is where, in 1833, Darwin (theory of evolution) has is very first sight of a glacier.  You can’t even begin to imagine how proud I am to have graced the same faraway corners of the globe of such a hero of mine, Charles Darwin.

Do you know what a ‘Patagonia Moment’ is? I didn’t either until it floored me.  Let me explain, I was on an expedition cruise through the Beagle canal and the Magellan straight down the very southern tip of Argentina and Chile.

After a full day’s sailing some of the most treacherous waters known to sailors it was time to get off the ship and head hiking in the mountains around Wulaia Bay.  The hike wasn’t exactly a walk in the park, so when I got to the top I needed to sit and catch my breath.  I was trying to concentrate on the speech Chris, my expedition leader was giving to the group about the formation and geology of the region but the views kept stealing my attention.  Then it happened.

The voices of the group all drowned out, it was just the mountain and I.  I was left gob-smacked at what I was witnessing.   The navy blue sea hugging the base of the facing mountain peak across the bay.  Clouds broke away from the light blue sky to sit with the snow on atop the mountain.  I was staring closely trying to figure out where the snow from the cap of the mountain ends and the clouds begin when I felt it.  It felt like something clenching inside my stomach, I felt strange.  My hands were shaking and my lip was all jittery. I begged myself, oh please don’t do it, Geraldine.  Too late, before I could contain myself the tears were already flooding down my face.  I’m actually cringing now even thinking about it.  I don’t know what came over me.  The nature of Patagonia is so powerful and perfect it just made something inside me feel, there was so much emotion in there, and only one way for it to escape, out my eyes.  Once I got myself together, I split away from the group and made my way back down to the bay.  I thought I’d gotten away with it too until Chris approached me with such enthusiasm in his eyes to congratulate me on experiencing The Patagonia Moment.  So it turns out it’s a thing!

You know that event where big chunks of ice break away from the glacier and fall into the sea with a thundering roar? These are called carvings. Some glaciers are more active than others.  Of course, with global warming, some glaciers are more active than they should be so I was lucky enough to witness a massive carving at Pia glacier in the Beagle canal, Chile.  When you see Mother Nature acting out so powerfully, changing the face of a millennia-old structure in seconds, you are very quickly reminded who is boss.  It really isn’t us mere humans.   The sheer size of Pia is epic; it’s about the width of the River Liffey at O’Connell Bridge in Dublin and is a million different shades of white, ranging from bluish to reddish.  It’s hard to believe you can see all the colours of the rainbow in a white sheet of ice but if you saw it, you’d believe me.  Pia herself has been around since the last ice age so I can only imagine what her peaks and crevices would say if they could talk.

The highlight of my adventure was, of course, spending a morning hanging out with the Magellan penguins.  I just adore them.  The Magellan penguin is large breed so they are impressive and boisterous with very little fear of humans.  They had no qualms about cutting across pathway right in front of my feet and even posing for a photo with me.  These penguins are Latino to the core, they serenade their loved one with song.  Bless them, it’s appalling but they give it a go.  The tilt their head toward the sky, open the mouth and pump up the chest by sucking in large gasps of air.  Then the magic happens, an orchestra of noises are let loose from his throat. They include belching, howling and barking.  Then they waddle over to their darling to be monogamous.  At least, for a while.  Unlike every other breed of penguin, the Magellan from Chile isn’t monogamous.  The woman will choose the man with the biggest – house.  It’s his job to keep the house up to scratch by cleaning it regularly and decorating with bit and bobs found along the beach.  They also rear the chicks by sharing exactly half the responsibility each.  Not a bad deal, in my humble opinion.

Hot chocolate with a generous swig of whiskey to warm the cockles of your heart after a long trek alongside a glacier is always a welcome treat.  I resisted stealing a penguin – trust me, I thought about it.  So, they one ritual I’ll certainly be taking home with me from Patagonia is the recipe for Chocolate Magallanico.  I feel like it’s something that could thrive here in our winter climes.

The ship is small by cruise ship standards.  Its capacity is just 200 passengers so it’s perfectly formed to navigate the canal, straight and sounds of Patagonia.  It needs to be agile in order to cruise and bend through the labyrinth that is the Beagle canal so the Ventus Australis brand new expedition ship is tailor-made for the job.  The floor to ceiling window that was the width of my cabin meant every morning I work up, I thought I was still dreaming.  The views outside my window can be described as now less than postcard perfect.

Every day of the cruise all us passengers joined smaller groups and were allocated an expedition leader who spoke our language.  We’d go for hikes up the mountains to find the best views across Tierra del Fuego archipelago or alongside ancient glaciers.  I was never disappointed by the knowledge and passion of the guides.  What I honestly adore is how much they genuinely love and care for the region.  They actually work closely with an organisation of scientists called CEQUA (Center of Quaternary Studies Fuego-Patagonia and Antarctica) to monitor and protect Patagonia’s wildlife and ecosystem.  One of the guides named Chris whom I got on really well with told me how Patagonia is imprinted in his heart and that she is his first love.  He lives on the ship 8 months per year without visiting family or friends so I was thinking, it’s just as well he’s in love with Ms Patagonia 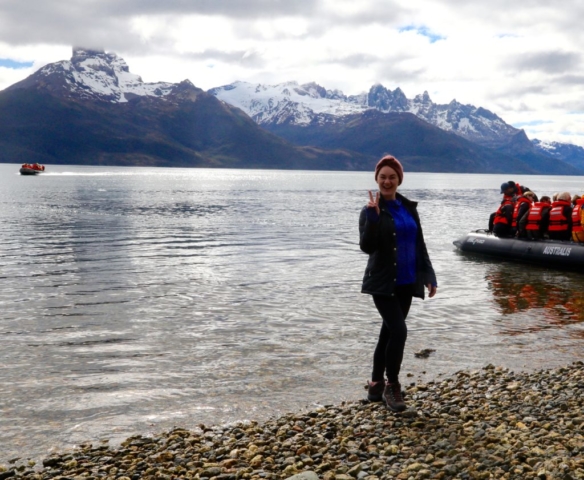 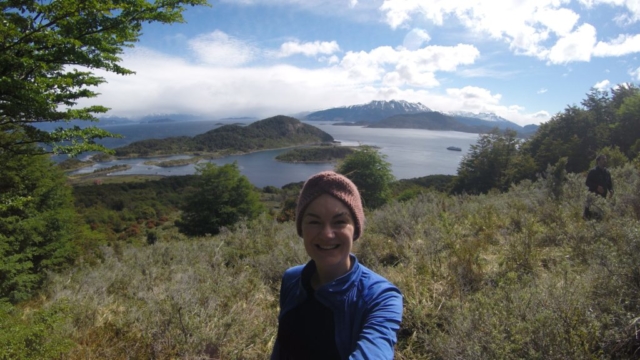 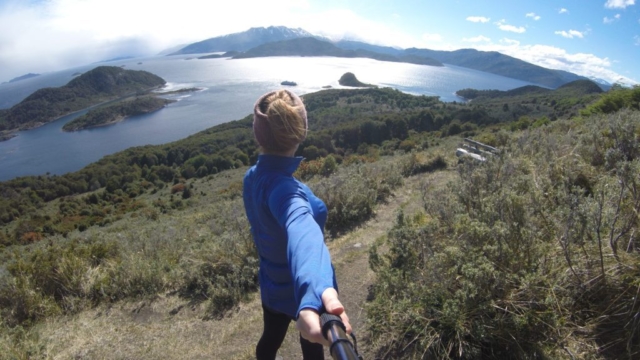 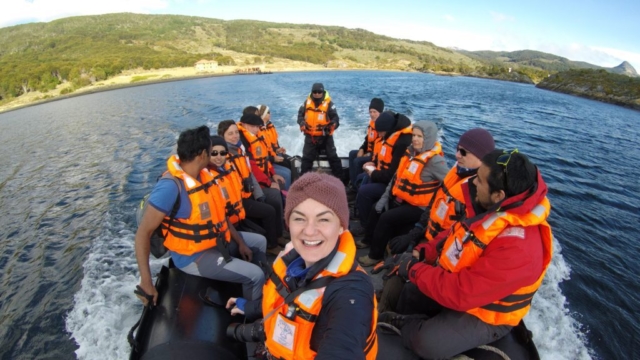 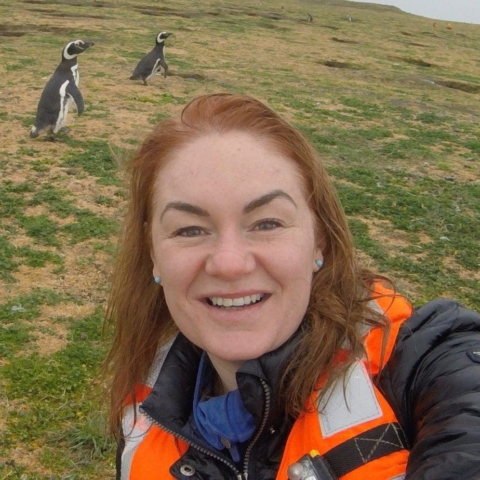 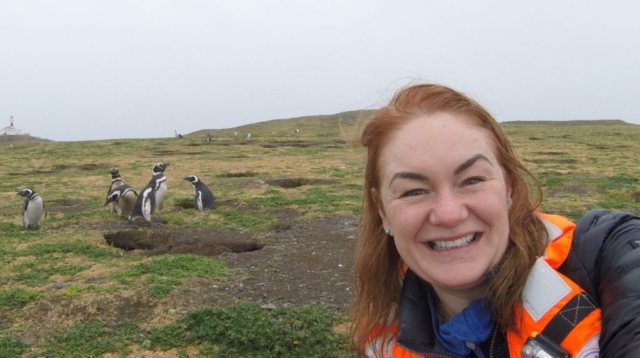 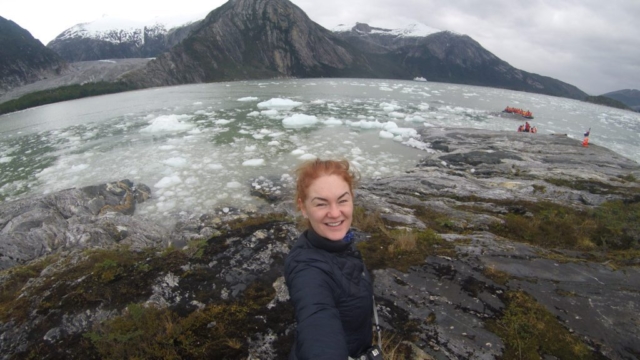 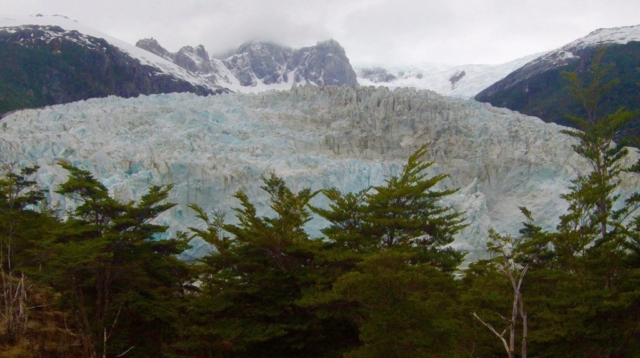 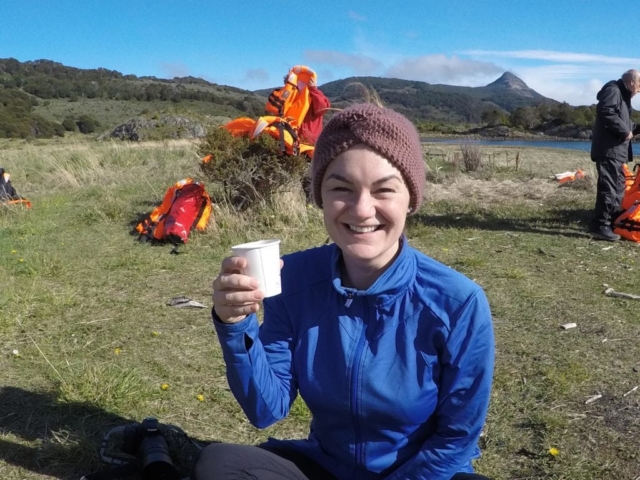 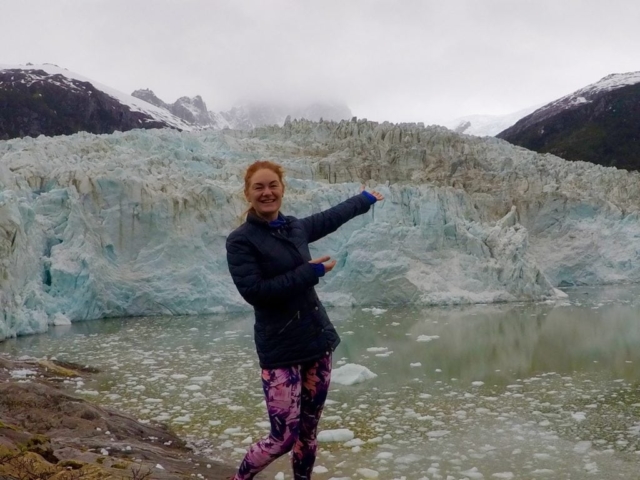 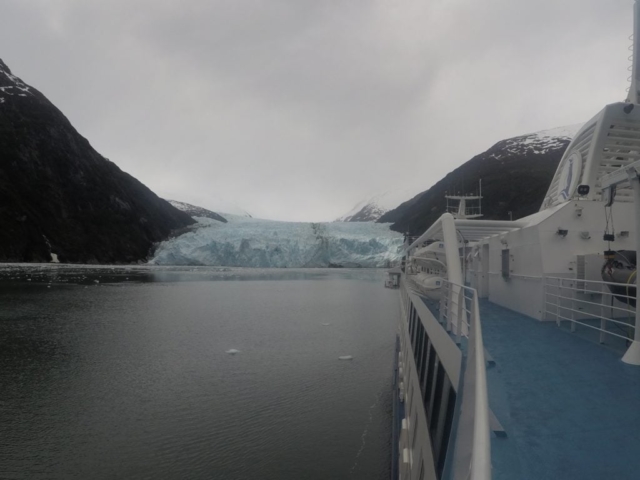 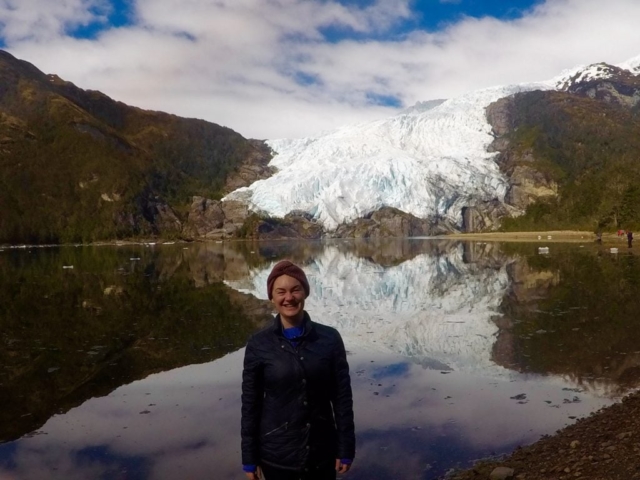 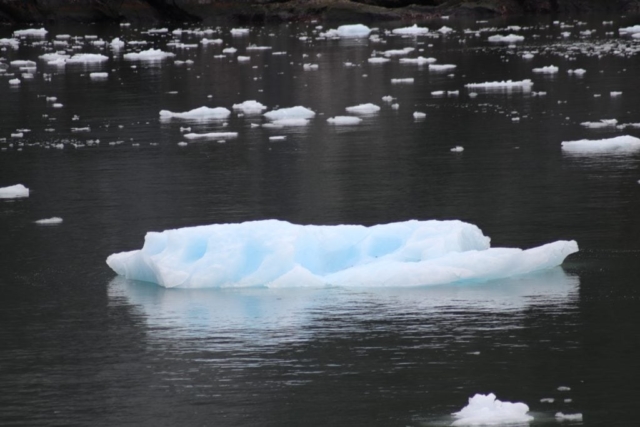 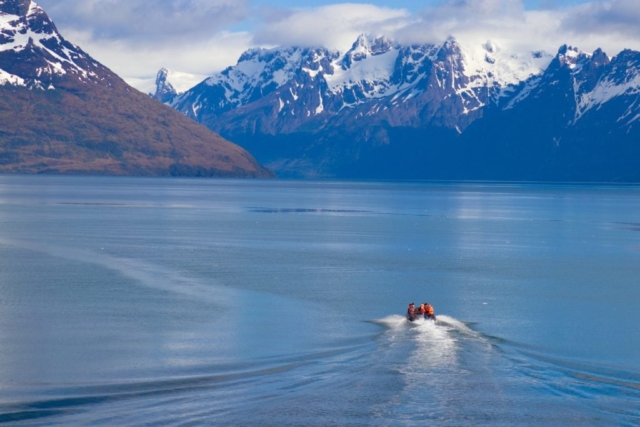 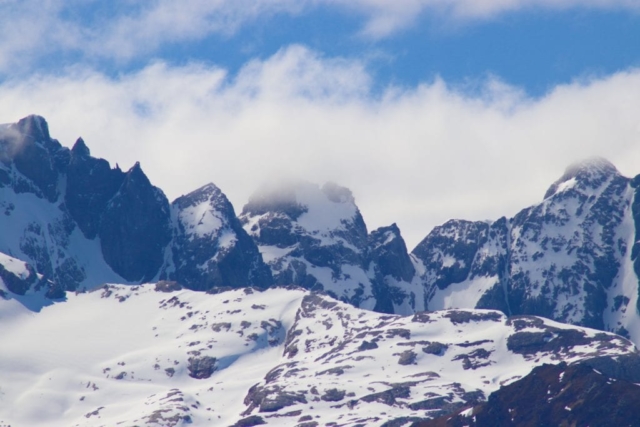 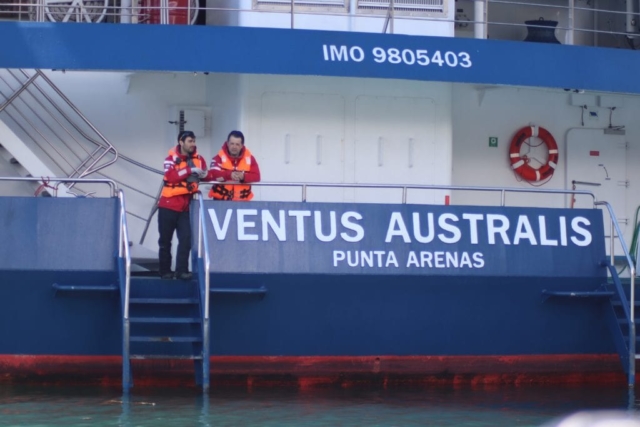 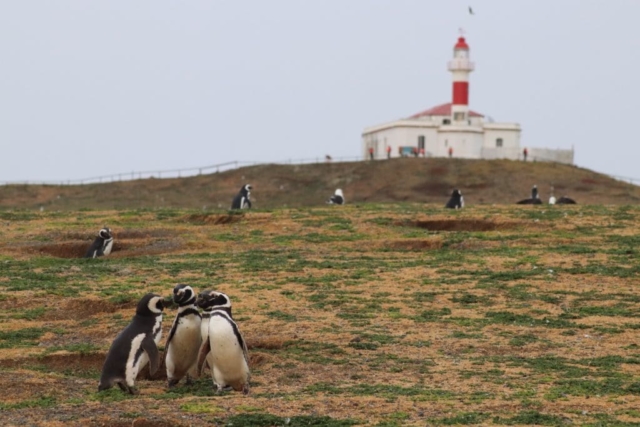 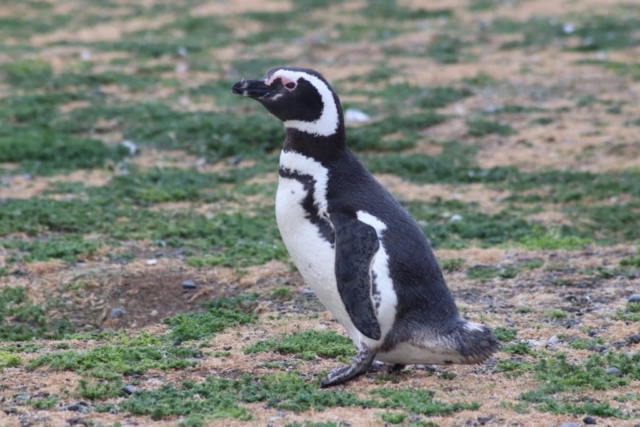 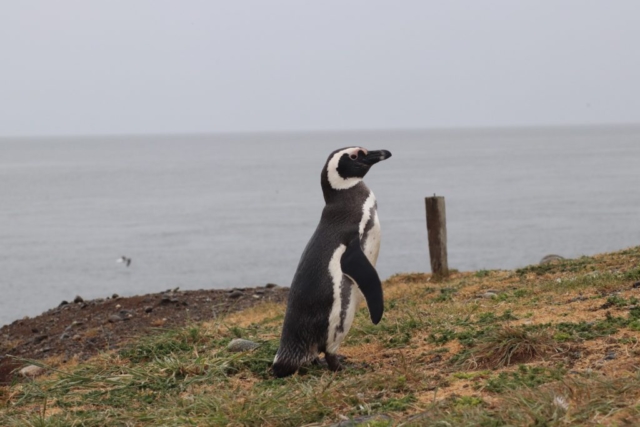 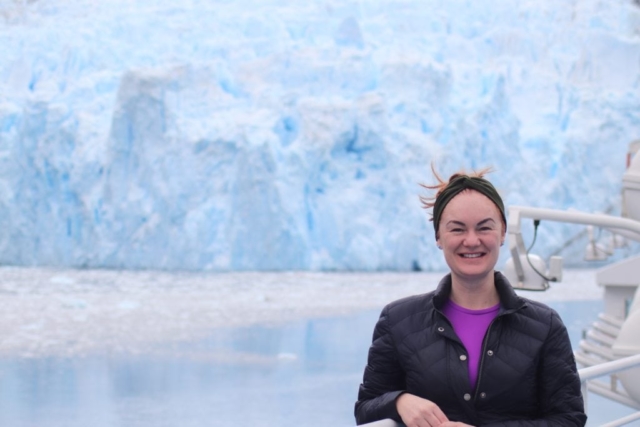 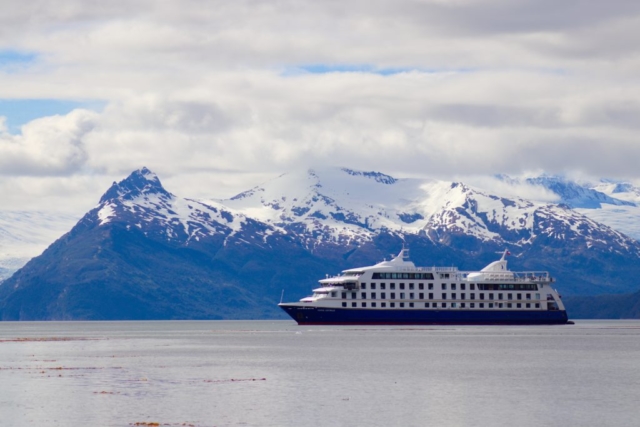 Domestic flight from Buenos Aires to Ushuaia with Aerolineas Argentinas  – €90